A Specialist Branding and Communications Consultancy

TONY EASTLEY: Workers making Nike shoes in Indonesia say they’ve been forced to accept less than the minimum wage and they’ve been stood over by military personnel specially hired to intimidate them.   Activists say the workers earn so little they get just enough to afford one meal a day.

After millions of workers went on strike last year in Indonesia over low pay and cost of living increases, the government lifted wage rates, but the workers at a Nike factory in west Java say they were made to sign a petition supporting the factory’s claim to be exempt from paying the new wage.

As a major league brand we’d all reckon that the Nike brand guardians need few lessons on management and PR but listening to recent news we are not so sure.

Is Nike getting too big for its boots (or shoes!) believing they are so entrenched in the global consumer psyche that nothing can hurt them – not even this news that they enlisted military force to intimidate their impoverished work force? And this appalling revelation coming hard on the heels of their announcement they’ve ditched Lance Armstrong for lying about his drug use.

No one denies that Nike makes great products – we imagine we can all run faster, play harder and look cooler in our Nike gear but what happens in our consumer minds when a brand so thoroughly betrays its values? What is the cost of this profit ethos? After this latest breech of brand faith we could be forgiven for thinking that the company feels the real worth of the Nike brand is now what they pay Indonesian workers – *$3.70 per day. (*ABC radio 15 Jan 2013).

In Greek mythology the goddess Nike flew around the battlefields rewarding the victors with glory and fame – the Nike billion-dollar archetypal brand image. The trouble is that our victorious Nike gear is now beginning to represent third world exploitation. 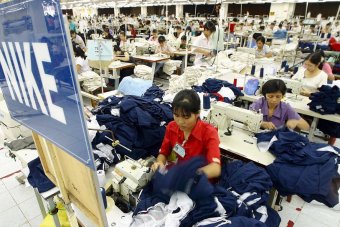 On the shop floor.